«After 57 days, on the 7th of February at 22:50 UT Mike Horn reaches the end of the Antarctic Continent! It’s Done!!” reads the message Horn sent to his home team.
Mike started his kite-ski traverse on December 13, 2016, at S70.1015 W009.8249, where he got off his boat and stepped onto the continent with a sled of approx. 210 kg. He arrived at the Geographic South Pole on January 9 (correction, not December 28 as written before), where he had eaten with the ALE staff, and continued north, beyond the Pole.
The distance from the coast to the Pole was 2,215 km in a straight line. His home team reported Mike had covered 5,100 km, therefore the distance to the coast should be 2,885 km. His exact location at the coast is not given yet. If the 5,100 km is the precise distance in a straight line, it is the longest distance covered by a kite-skier on Antarctica, according to statistics AdventureStats. [Ed. Mike’s exact end position and distance in a straight line will be updated as soon as it is available.] 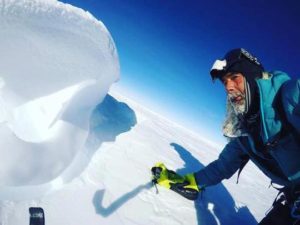 In the 2005-06 season, Norwegian Rune Gjeldnes completed solo unassisted kite-ski traverse from Novolazarevskaya to Terra Novo, covering 4,804 km. He didn’t receive any meals along the way, therefore his traverse is classified as solo. Rune flew to Novo but left Terra Nova by boat.

Update February 12, 2017: According to the Rules of Adventure at AdventureStats, an Antarctic or Arctic traverse has to traverse the full continent or ocean. The start and end points have to be from the boundary between land and water — the coastline. Permanent ice is considered part of the ocean, not the land. The starting point Horn gives, S70.1015 W009.8249, is out in the Ocean and app. 100 km from land. Measuring the actual crossing should be from the edge of land. At the longitude West 009.8249 land starts at S70.9200 so Mike Horns trip was 4,713 km and Rune Gjeldnes, 4,804km. All distances measured in a straight line.

Because of the meals Mike had received at the South Pole, his traverse as a whole can’t be classified as solo, according to the Rules of Adventure. Read also the article, What is Solo. The separate legs, before and beyond the Pole, were done without receiving anything from anybody, therefore solo to the Pole classification.
Polar Statistics at AdventureStats
Interactive Map: Antarctica Skiing Routes

Mike’s last five days were not easy because of 1-2 meter high sastrugi and gusty winds that made kiting difficult. His sled got caught between the sastrugi, while the kite wanted to go forward. The last days he descended quite fast, and sometimes he got stuck and his sled hit him from behind. Another time, his kite took off with his sled. He managed to catch up with them, jumped on the sled, got rid of his mitts, got hold of his pocket knife, and cut the lines that attached the kite to the sled. He found the kite again, around sastrugi. Mike spent up to 14 hours on his skis. He also reported that the sun set at night, which made for cold tent temperatures this late in the season. Latest reported position was on February 6: S67º 15′ E138º 52’.
No news where Mike’s pick-up boat, Pangaea, is, or if the electrical problems have been fixed, or if the boat will be able to pick him up. Updated February 8, 2017, Mike’s position: Bill Spindler pointed out to us that this Swiss article says Mike is at the French Science Station, Dumont d’Urville. Coordinates: 66°39′46″S 140°00′07″E.

Update 2, February 10, 2017: Mike is hosted by Concordia Station, ”I’m sitting here in a container camp for 3 days since my arrival on the coast of Antarctica. It’s nice to be here in the comfort of 4 walls with 11 other men that spends 4 months here resupplying a research base called Concordia 1150 km from the coast in a South Westerly direction. […] The planned departure date back to Hobart Tasmania is on Monday, a voyage that will take 6 days by boat.»

As for previous skiers approaching and leaving Antarctica by boat, we tapped veteran Norwegian Polar Explorer, Lars Ebbesen, for info. «Rolf Bae and Eirik Sønneland came by boat, over-wintered at Troll Station, and crossed with no depots, then left from the McMurdo Sound by boat.” That was in the 2000-01 season. They covered 3,800 km in 107 days.
Previous: Antarctic Ocean: 2 Sailboats and 3 kayaks — Elements bigger than the human dictates
Interview: Sebastian Copeland, North Pole attempt despite grave notes

Lisa Blair on Climate Change Now — Around Antarctica
The solo lady had to do some maintenance work on her main sail and some work on the bow. She needed to work on the head sails so she sailed off the Jib 1 while I worked on Jib 2 and then switched. When she finished she could appreciate the sea with “the most incredible colour blue, almost electric” […] «There was one big Albatross just flying around and I was very lucky just to have the chance to appreciate it. Moments like those are what make a journey like this worth every effort,” said Lisa.
She does not get much time for sleep and seems to sleep at most 2 hours at a time.

Lisa sailed around New Zealand where, she said on Feb. 6th, «I am thankful to have such moderate conditions for this section as there is a large shelf to the bottom of New Zealand that I will be going over. The depth of the water goes from 5km deep to 400m so a rapid increase in the depth.» Next day the winds picked up. Latest report is that Lisa had passed her second cape; the South West Cape, which is off the bottom of New Zealand. The next cape, Cape Horn is still some distance away.
Around the Web: Antarctica’s changing Larsen Ice Shelf